AZ Alkmaar knew at the end of last season that Alireza Jahanbakhsh could leave the club, and now it’s looks to be happening.

The report mentions he has only his medical tests pending before completing a switch to the Premier League.

David Wagner’s side will pay €25m for the Iranian international, who will ‘soon’ become their new player. His transfer will see AZ break their previous record in collecting the highest fee from a player’s sale.

The record is currently held by Vincent Janssen, who joined Tottenham Hotspur for €22m in 2016. AZ director Max Huiberts convinced Spurs to pay top dollar for the Dutchman. 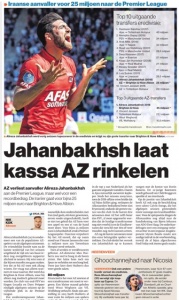 Two years later, he is once again in the market to allow his star to join Brighton for a higher fee.

Jahanbakhsh impressed for the Dutch outfit last season, scoring 21 goals and registering 12 assist in the Eredivisie. He was the top scorer in the league, but was unable to replicate his club form for Iran at the 2018 World Cup.