Chelsea have reportedly sent scouts to the Portuguese cup semifinal between Sporting and Porto this week, with one specific target to be watched.

As written by newspaper A Bola today, the Blues emissaries had an eye on the Lions’ winger Gelson Martins, who had a pretty good performance.

The outlet claims that the Chelsea scouts were impressed with his display, as Sporting beat Porto 1-0 in 120 minutes, making it level on aggregate, then eliminated the Dragons in a penalty shootout.

Gelson Martins has a €60m release clause, and that’s what the Portuguese press expects Sporting to demand in case a club goes for him. 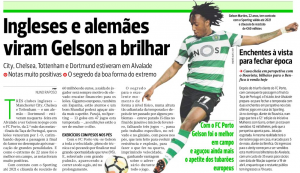 Currently with 13 goals and 12 assists this season, the fast winger is considered to be one of Sporting’s biggest talents in the past few years, and Chelsea should have some big competition to get him.

Manchester City, Tottenham Hotspur and Borussia Dortmund were other clubs who sent scouts to this match and watched Gelson’s performance as well.